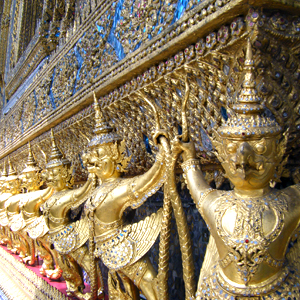 What’s the most important thing to bring on a journey to Vietnam and Cambodia? Your bargaining skills! The art of haggling is a must at the bustling markets of Hanoi, Siem Reap, and Ho Chi Minh City where you can negotiate everything from luxurious silk to colorful ceramics to a tasty bowl of pho. The number one rule of thumb-always be willing to walk away. Luckily, there’s so much to walk toward on this colorful tour of Southeast Asia, including the fascinating wartime tunnels of Cu Chi, a fishing lesson on the Thu Bon River, and a breezy city cyclo ride around vibrant Hanoi. The picturesque pagodas of Hue and Hanoi are just a taste of what’s to come at the mystical temples of Angkor. Inside the “City of the God Kings,” you’ll find the architecturally magnificent ruins of Angkor Wat delightfully much more than you bargained for. Balance the high energy of Bangkok with the calming force of Chiang Mai by adding this dual city Globus extension to your Southeast Asia tour. In Bangkok, you’ll cruise through its famous klongs, visit its calming Buddhist temples, and experience its vibrant city life. Then fly to Chiang Mai. Only reached by river or elephant trek until the 1920s, this ancient walled city in the picturesque Himalaya foothills still holds its remote charm – as well as more than 30 opulent temples.

Established in 1767 as the capital of Thailand the city maintains a timeless charm. An extensive system of canals has earned it the nickname “Venice of the Far East,” and visitors should make a point of experiencing its floating marketplace. Bangkok is of course also world-renowned for its wealth of ancient temples and beautiful gardens–and did we mention, shopper’s paradise. An hour from Laem Chabang is Pattaya, Thailand’s most popular vacation spot. That’s where the elephant kraals come in.

Thailand’s second-largest city and the gateway to the country’s north was founded in 1296. You can still see the moat that encircled the original city, and there are 300 wats, including Wat Chiang Man (home of the 1800-year-old 10-cm-high Crystal Buddha), Wat Phra Singh (built in the classic northern-Thai style) and Wat Chedi Luang (partially ruined by earthquake, cannon fire and recent restoration efforts). Doi Suthep rises 1676m to the west of the city providing a dramatic backdrop and, should you venture up, fine views of the city.

Modern Chiang Mai is easily managed, with many visitors choosing to get around by bicycle. It’s well-known for its restaurants and also has heaps of good guesthouses (although the hotel ‘safes’ are notoriously not). Compared to Bangkok, Chiang Mai’s evenings are cool and conducive to moseying around the central Night Bazaar. To get value for money, bargain patiently but mercilessly; no less is expected of you. When you’re sick of honing your free-market warrior attitude, Chiang Mai is a good base for mountain treks. Just about every guesthouse advertises treks to visit the hill tribes who live in the surrounding area. You may want to think twice about joining such an excursion if you have qualms
about interrupting the traditional patterns of life in hill-tribe areas. This part of Thailand is considerably overtrekked and some hill-tribe villages have been turned into little more than human zoos.

Smaller, quieter, greener and more dignified than Ho Chi Minh City, the nation’s capital can sometimes look like a provincial French city. This, like most things in Vietnam, is changing fast as economic restrictions are lifted and old regulations are forgotten. Life (and traffic, unfortunately) is returning to the streets and shopping no longer means a trip to a dreary government department store. Still, the city remains quiet enough for cycling to be the ideal means of getting around, and many hotels and cafes rent bicycles.

Places to visit include the fascinating 11th-century Temple of Literature (site of Vietnam’s first University), the 15th-century Old Quarter, some enchanting lakes and temples, and the Mausoleum of Ho Chi Minh.

Budget accommodation can be scarce in Hanoi, especially between June and September, but many people rent rooms and with some searching you should find something. Whatever your budget, you’ll pay more for accommodation in Hanoi than elsewhere in the country. Hanoi has plenty of domestic and international air connections, and is connected with Ho Chi Minh City by the Reunification Express train.

As they say on TV, we’re back! Two decades after the last Americans left what was then South Vietnam, the country is luring back Americans as well as many other nationalities with its colorful, diverse blend of Vietnamese, French and American cultures. Divided into 18 districts, this dynamic city has experienced a dramatic reawakening after so many
years of isolation.

Your ship will dock in the well known resort area of Vung Tau. To reach Ho Chi Minh City (formerly Saigon), the capital, requires a day long shore excursion. For those with an appreciation of foreign culture as well as American history, it is highly recommended.

Prices are per person, land or cruise only, based on double occupancy. Offer subject to availability and change without notice. Some restrictions may apply. Please ask us for details.

Charges not included in the land vacation price: airfare to and from the start of your vacation; airline baggage fees including checked and/or excess baggage fees; Federal inspection fees for the Federal U.S. Customs and Immigrations; agricultural tax; other per person taxes imposed by government entities; applicable cruise taxes, fees, fares and port charges; passports; visas and vaccinations; transfers; tips to your Tour or Cruise Director, Local Host, driver, Local Guides, and/or ships’ crew; gratuities on ferries, trains, and cruise ships; laundry; telephone; minibar; alcohol, beverages, and food outside of the contracted menu as presented at a hotel or restaurant (these extra items will be billed to you before leaving the hotel, ship, or restaurant); additional excursions and activities not listed as ‘included’ in the itinerary; porterage at airports or train stations; Travel Protection premiums; and all other items of a personal nature.